Before we begin, a primer on the lovely city that is Cleveland, Ohio:

I’ve been to/through Cleveland a handful of times, but not in MANY years. We have some good friends in Cleveland, so we figured we’d make a stop for a couple days to hang with them. Mostly because Max has been telling me about Melt, a gourmet grilled cheese restaurant, for literally five years, so I obviously needed to eat there. Cheese might actually be my favorite thing. Max was actually a little afraid to take me there for fear it wouldn’t live up to the hype he’s been giving it for the last half decade. 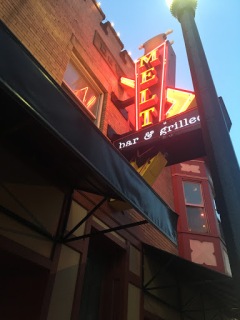 But it did. I got a grilled cheese sandwich with friggin’ pierogi in it. You know how I said cheese might be my favorite thing? Potatoes are a very close second. So this was AMAZING: 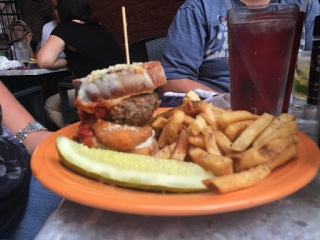 And  the guys split the Melt Challenge, which has 12 types of cheese and was featured on Man vs Food and also made me think I was going to die of lactose intolerance/my arteries closing just from looking at it:

I don’t even know what to do with this, really. I love cheese and this was almost too much for me. I had one bite, just because, and that was plenty. Because the guys were splitting it, they were ineligible to compete in the challenge itself – finish the whole thing, sides included, and get a t-shirt and eternal glory and the respect of everyone around, I think. I can’t even imagine eating half of this so god bless those of you who have completed this.

After we pumped ourselves full of dairy, we went to 16-Bit, an arcade bar down the street. They had some really creative drinks, including the Bill Nye which was served in a beaker: 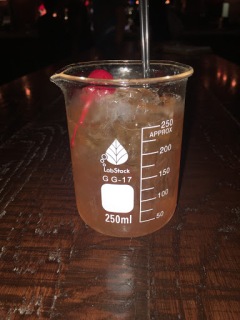 We played a bunch of video games – I am awful at most arcade games except Galaga, and I am very rusty at pinball. It was a really cool bar and I highly recommend it if you find yourselves in the area. Unless you have small hands. That made a lot of the games difficult to play…turns out it’s hard to pilot an X-Wing if you can’t actually grip the controller because you have tiny baby hands. But still fun!! And a great drink selection. They had an N64 and a couple other consoles, it appears, outside but we didn’t get the opportunity to play any of them.
Next time: fun times in Cleveland again!!! Stay tuned for more food and drinks and outlandish Clevelandish adventure.