Tuesday morning, post-cat wrangling, we thankfully had a short day of driving ahead of us. Our next major stop was planned to be Cheyenne, WY, but that’s roughly a 10-hour drive from Des Moines to Cheyenne, so we needed somewhere to stop in the meantime.

Enter Nebraska, a place I never thought I would be excited about going to.

Des Moines to Council Bluffs/Omaha is only a two hour drive, so we took our sweet time getting on the road. It resulted in a late stop, but a lunch stop nonetheless. We are big beer nerds (in case you didn’t catch that already?) so in searching for “pet friendly restaurants” on Yelp, when a brewery popped up, it was the natural first choice.

We stopped at Benson Brewery in the Benson suburb of Omaha, a small brewpub with a pretty great menu of food and a diverse set of beers. I got a New England-style IPA, and Max got an American Wheat ale. Both were fantastic. I had a black bean burger and Max got the daily “brewer’s special” burger – which had cheese, mushrooms, and caramelized onions. And look at that sky! Benson had a very cute little Main Street area with a bunch of shops and was very walkable, although it seemed to be a ways out of downtown Omaha (but my sense of direction in the Midwest is sketchy at best so take that with a grain of salt). 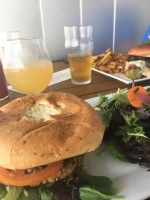 We got back on the road for another hour-or-so drive to Lincoln, where we were crashing for the night. It was unusual to arrive at our nightly place to stay before 5:30! That was a definite positive to a short day of driving. After a shower and a brief period of attempting to become human, we went out to explore downtown Lincoln.

I am essentially a professional grad student at this point and Max is both a college campus nerd and a fellow Big Ten school graduate, so we walked around the University of Nebraska campus for a little bit. Having gone to a school without a lot of green space, I am always shocked at how many campuses have trees! and flowers! and art installations! We didn’t go in any buildings, but the outsides were very nice. It seemed like there was some sort of orientation programming going on, so we didn’t hang around too long – but what we did see was unexpectedly beautiful.. 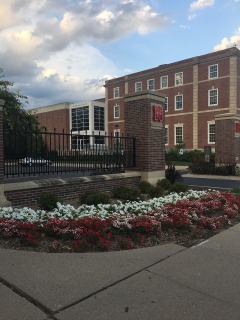 We followed up our impromptu tour of University of Nebraska’s campus with a stop at – you guessed it – another brewery. This one, Boiler Brewing Company, had by far the most eclectic beers we’ve found yet on this trip. I ordered a Hibiscus Saison followed by a Kolsch and Max had a nitro Root Beer Float Milk Stout. My beer was great. Root beer is one of my top five least favorite things, so I absolutely hated Max’s beer, but he said it was delicious so I will take his word for it. More importantly, this bar was SO COOL. I may have mentioned before that I am a sucker for exposed brick, and this brewery was almost entirely brickwork. Their taps looked like old machinery – Max called it “steampunk AF” and everyone that was working there was incredibly nice. Definitely check it out if you ever find yourself in Lincoln, Nebraska! 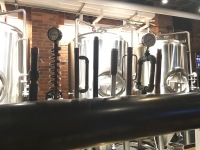 From there, we went to get some falafel which I did not photograph but was fantastic, and then headed back to the hotel to crash for the night. We knew we had a long drive ahead of us, so didn’t want to get too crazy – just went to bed and ate the hotel’s buffet breakfast in the morning.
The Lincoln to Cheyenne trip was the longest driving day thus far – which I will document in the next set of posts – but I will leave you with a couple of pictures. I didn’t ever, ever think that driving through Nebraska would elicit emotions from me. This east coast girl loves her lakes and mountains, and so Nebraska was not a place I ever thought I’d be inspired by. But this sky. You can see so far, you can see so much. The land is so flat and you can see exactly where the rain is going to begin or end. I was in absolute awe as we drove through Nebraska – it is at once empowering and humbling exactly how much nature can do. Until next time, I hope you find these skies as breathtaking as I did. 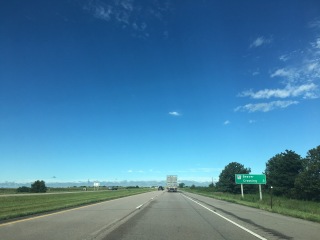