Hey y’all! Remember me? Remember this little baby blog that hasn’t had any new posts in a few months? It’s been a whirlwind of a summer…I started my grad school summer classes in June, July was full of concerts and travel and weddings and engagements and general insanity, and then California schools start SO early, so I have been student teaching for almost a month already! This year has gone by SO fast, and I have certainly not done my due diligence in keeping up with the travel blog. I’ve also been hard at work on my Etsy shop, The Anchor & Bird , so if you love string art, signs, travel-themed stuff, military family gifts, or just semi-rustic / semi-nautical artwork definitely go check it out!

But never fear! I’m working on catching up with all our adventures of the last few months. Slow and steady wins the race, right? (I guess it helps if I start the race).

Way back in the end of March, basically a million years ago, we headed southeast to Knoxville, TN, for spring break. We had a 4:45am flight out of SFO – which means we left our house at about 1:30am to make sure we got there in time – and I am not a morning person so I was less than pleased. Unfortunately, when you’re flying east it seems to always be either way too early in the morning or you’re stuck on a red-eye, neither of which I really enjoy.

Anyways. Pro-tip: if you’re flying out of SFO hella early, be aware that the security checkpoints don’t even open until 4:00 AM. So, if you’re like my insane husband and like to be at the airport two hours early…don’t. 😉 The nice thing about getting there that early is that security goes pretty fast, although our tickets got messed up and mine didn’t have Pre-Check printed on it and I wasn’t awake enough to argue with United’s customer service agent to fix it, so I had to wait in the normal people line (life is SO tough, I tell ya) which resulted in some really hilarious people watching. But I digress. We get through security, etc., find our gate, realize that nothing is open. I flag down an airport employee to ask where I can get some dang coffee, and evidently everything at SFO opents at 4:30. COOL. I am not human until I have coffee, and as previously mentioned – our flight was at 4:45. This was literally the only time I’ve been glad for a minor flight delay, since a 20-minute delay in boarding allowed me to stand in line at the little sandwich shop next to our gate and get a coffee and a bagel. So, moral of the story: if you’re flying out of SFO on the first round of flights, consider bringing your own snacks.

Anyways, after a flight/nap from SFO to Chicago – always one of my favorite airplane window views, 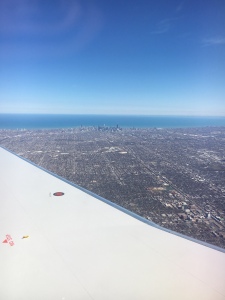 we made our connection (and got some food at an airport Chili’s) and hopped on our plane to Knoxville. I have trouble sleeping on planes, so after I managed a nap on the first flight, I knew I wouldn’t be so lucky on the next one. ORD – TYS is about an hour and a half flight time, which is plenty of time to read a book. Inspired by Anthony Bourdain, I try to find books that have something to do with wherever we’re headed, so I read The Atomic City Girls by Janet Beard, a novel about the women who worked on the computers and such at Oak Ridge during WWII, later learning that they were a part of the Manhattan Project. It was a decent novel (I gave it 3 stars on Goodreads which to me means it was a good read and I enjoyed it but it wasn’t lifechanging), definitely good for a plane read, and it’s always fun to read about someplace you’re going or someplace you’ve been.

We went to Stock Burgers for dinner the first night – which, according to the internet, looks like it’s just called The Burgers now. I have to be in the mood for a burger, which I was not at the time, so I got a chili dog (delicious!) and Max got a burger of some sort, complete with a brew. The food was great, and I’m a little bummed I wasn’t feeling a burger, so I’ll have to try it next time. 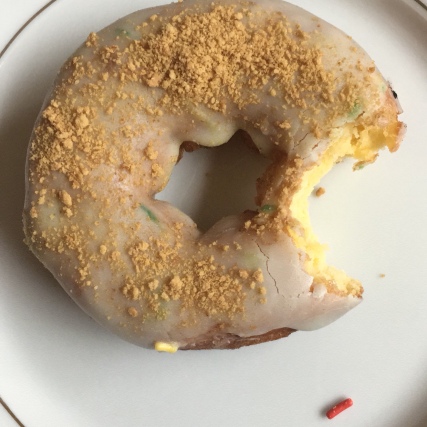 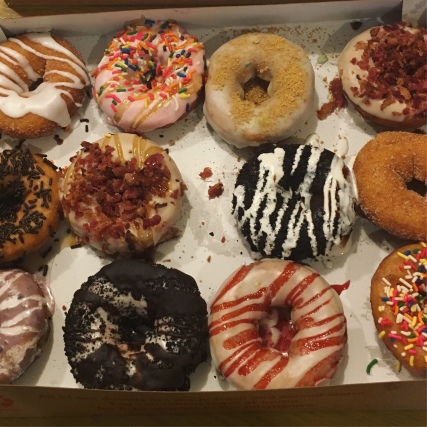 Saturday morning, my mother-in-law kindly brought home some Duck Donuts after I nearly leaped out of the car seeing the sign the night before. Duck Donuts is an NC-based donut chain with every flavor and topping you can imagine, and they opened one near where I lived in Virginia and I fell in love. As you may remember from my Vegas trip in February, I can be a bit of a donut fiend. Seriously, if you ever get to somewhere with a Duck Donuts, get one (maple bacon! or anything with peanut butter! Or whatever your heart desires!) and I promise you, you won’t regret it.

The afternoon took us to a tour of Knox Whiskey Works, a small batch, local distillery whose claim to fame is their Tennessee Tailgate Orange Vodka and that they are 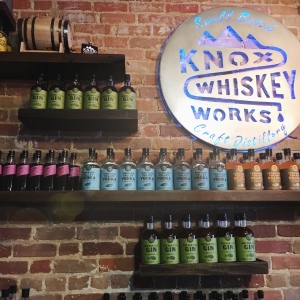 the first (legal) distillery in Knoxville. We tried everything – I took one for the team and drank the gin that no one else wanted, again because life is rough 😉 – and ended up leaving with a bottle of the Marble City Pink Gin, Deals Gap Dragontail Whiskey (named after the Tail of the Dragon, which we drove way back in 2014), and the Cold City Old Brew Coffee Liqueur, which I may or may not be drinking in my coffee right now. ;). I also really enjoyed the orange vodka, though we decided not to buy a bottle as we had to figure out how to get them back to California. 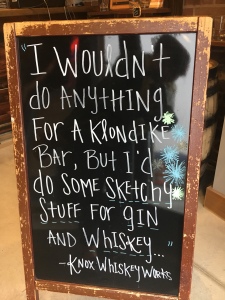 Dinner took us to Northshore Brasserie, a French/Belgian restaurant known for their moules and cocktails. I’m pretty sure I had a French 75, and definitely got a moule for dinner. I can’t remember which one – because they were seriously all amazing, and ugh, the BREAD was incredible – but if I remember correctly, between the three of us we got 3/4 of the moules so we all had a little bit of everything. We continued the evening with a bottle of prosecco and some cheese and snacks from the local delicacy shop, Kroger ;). 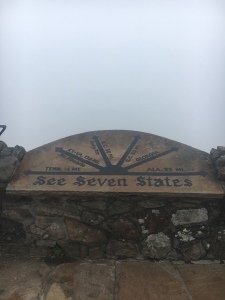 Sunday morning we started the hike down to Atlanta (which will be its own blog post, coming soon!) and stopped at Rock City to see the rock gardens and Lookout Mountain. Unfortunately, it was so foggy that you couldn’t see ten feet in front of you, much less the seven states advertised, so we just have to trust that there are seven states out there in the fog. The rock gardens were pretty cool, although it was VERY crowded since we were there on spring break and it was full of tourists. We tried to also go to Ruby Falls, but the line was so long that we decided to save it for next time. We had ourselves a blast with our friends in Atlanta, and rolled back up to Knoxville on Tuesday afternoon. 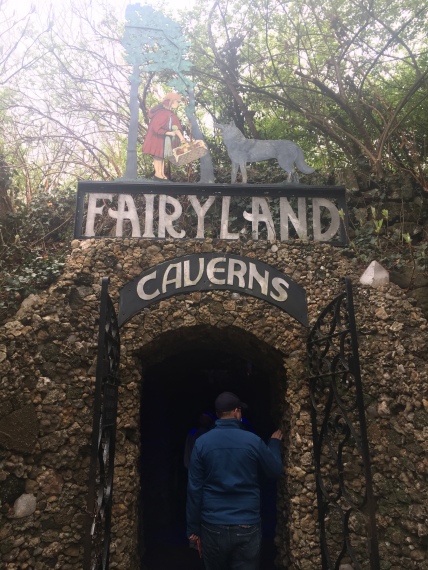 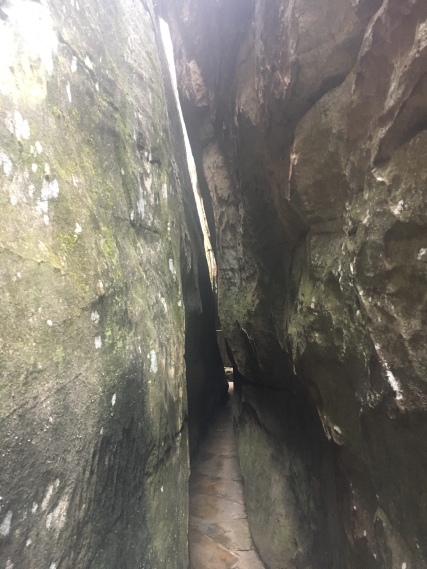 The entrance to the Fairyland Caverns portion of Rock City (which was kind of a creepy little fairytale village…lots of black lights and weirdness) and the “Fat Man Squeeze,” which is decidedly less skinny than it looks. 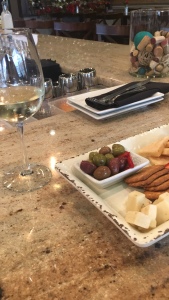 Wednesday found us at Water into Wine Bistro & Lounge for happy hour, which has apparently been voted Knoxville’s best wine menu (and the wine menu was fantastic!), so we had a few glasses of wine and some snacks. The atmosphere was great, the staff was incredibly friendly and knowledgeable, and I would definitely recommend stopping there if you are in the Knoxville area and in the mood for wine. Check out this cheese plate: 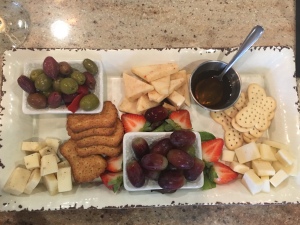 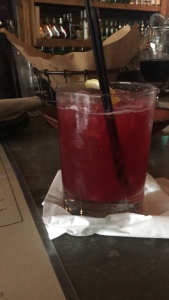 Thursday, we headed into downtown Knoxville to do some exploring 😉 and found ourselves at Chivo Taqueria, which had incredible cocktails, fantastic tacos, and hilarious names for all their menu items. I had a Black Betty and a Berry Manilow, and Max got a Rye, Felicia (and a Cigar City stout, because when in Cigar City’s distribution area…). We got an order of chips and guac (amazing) and an order of Clusterduck tacos (incredible). Of all the places we’ve been on our various trips to Knoxville, this might be my favorite place. Everything was amazing – the food, the cocktails, the atmosphere, the decor, the staff – so if you can only go to one place in Knoxville, this should be it. 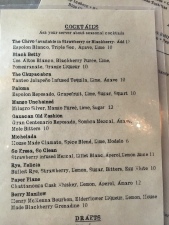 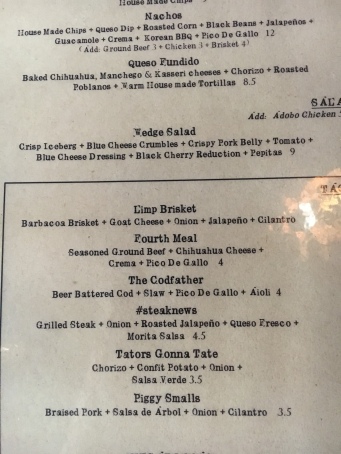 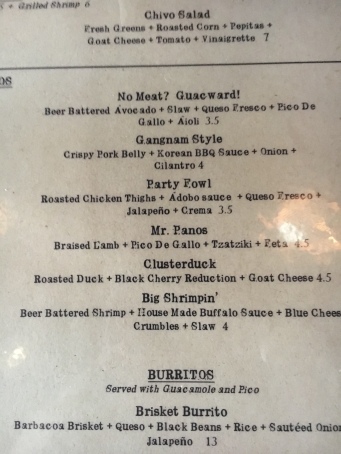 For dinner, we went to trivia night at Blackhorse Pub & Brewery, a brewpub originally based out of Clarksville, TN, with a second location in Knoxville (where we were). I am a sucker for a good trivia night, although we didn’t even come close to winning. I had a chicken mozzarella flat bread, a Hefeweizen, and a Blonde Ale, all of which were pretty standard brewpub fare.

Friday we kept ourselves busy with family activities and my very first Passover seder (what an experience for this recovering Catholic), and started our journey back west early Saturday morning. Thankfully, the Starbucks at the Knoxville airport was open, so I was able to get some coffee before our travel day began. We once again had a layover at ORD – are you really at O’Hare if you aren’t eating crappy airport pizza on the floor because there are no seats left at your gate? – had an uneventful flight back to SFO, and stopped at Maverick Jack’s in Burlingame for some lunch before heading back down to Monterey.

Coming soon: touristy things in Atlanta, a short weekend in Kansas City, Memorial Day weekend in Las Vegas, summer in California, some baseball, some beers, and much more where that came from. 🙂